Traditional Chinese Veterinary Medicine easily dates back to more than 2000 years ago. Whereas Western or Modern medicine attempts to detect and treat specific diseases and disorders in the patient, TCVM views the disease process and the patient in relationship to each other and strives to assist the body in its return to a balanced state so as to allow optimal healing and health to occur. This difference can be compared to the mindset of a mechanic who has a very targeted approach to looking for the problem to fix versus a gardner who looks to correct the overall imbalances of what the plant needs to thrive in order to bring about optimal health and performance. Originally, TCVM was used preventatively to maintain health by identifying imbalances and blockages in the physical body before symptoms of the imbalance were allowed to manifest. In fact, despite the undeniable healing powers of acupuncture and the various herbs, TCVM doctors were only paid to keep their patients healthy. When the patient got sick the cost was incurred by the doctor! Today we use acupuncture and the Chinese herbs to address a wide variety of conditions in the horse in addition to its historic benefit of prevention and stimulation of overall health.

How this works can be easily explained if you were to dive deep into the complexities and sometimes mysteries of how our neurological system works. On some level acupuncture is neuroanatomy and neurophysiology at its finest. With the stimulation of acupuncture points that consist essentially of nerves, a variety of mediators, mostly neurotransmitters, are released that create a cascade of events that bring about both local and systemic responses. These acupoints can be stimulated in a variety of ways. 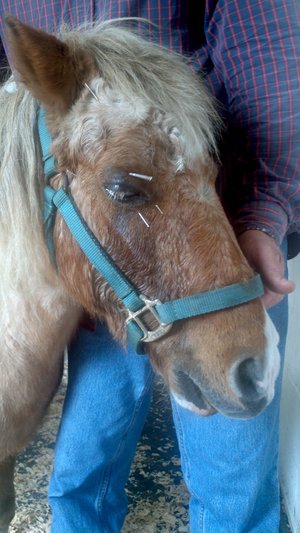 While acupuncture and Chinese herbs can be very stand alone modalites, like most of what I do, they can be easily incorportated with other energetic as well as conventional treatments.