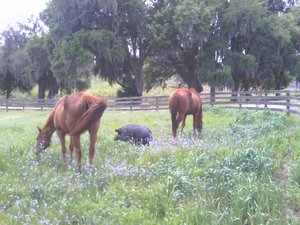 Being herbivores, horses naturally take to herbs and their medicinal benefits. While herbs can be used for symptom relief, they are also very effective at being quite curative. Though the use of herbal medicine in horses is widely accepted, we may actually be under utilizing the variety of herbs available and their consequent therapeutic benefits. That being said, it must be mentioned that not all herbs and combinations of herbs are safe and therefore need to be used under the guidance of a qualified adviser.

Some of the more popularly used herbs are Silymarin or Milk Thistle for supporting liver function, Garlic for immune support and Chaste Tree for endocrine support, just to name a few. Yet there is a less commonly known group of herbs known as adaptogens whose immune system boosting properties offer promise for mitigating the negative effect of both physical and psychological stress which is no less a problem in horses than it is in people. The initial research looking into the physiological effects of these adaptogens was conducted by a Russian scientist by the name of Nikolai Lazarev in the 1950’s. He purported that adaptogens originated from plants and could impart upon an individual a heightened state of resistance to better withstand extraordinary challenges and more effectively adapt to physical and mental stresses. Later his protégé, Brekhman, would expand the definition to include the following three points: 1) an adaptogen is protective and can increase an individual’s resistance to physical, chemical or biological stresses; 2) an adaptogen boosts recovery and the normalization of physiologic functions; and 3) must be harmless. The protective, harmless and recovery boosting properties of adaptogens made them a perfect fit for being able to improve athletic performance. This research of adaptogens continued and was later believed to have been the reason for the Russian’s dominance in the world of international sports in particular the Olympic Games. Scientific research conducted since the 1950’s in Russia and more recently in Sweden, Germany and the United States has shown that adaptogens have the ability to influence the body’s basic physiological functions to stimulate its own healing processes!

We are fortunate today to have such a combination of adaptogens available for horses called APF. While there are three different versions (APF, APF Plus, and APF Pro), they all include a combination of a number of the following herbs: Eleutherococcus or Siberian ginseng, Rhodiola, Schizandra, Aralia, Echinopanax, and Rhaponticum. Horses experience stress in a number of ways via the rigors of training, trailering, weaning, illness, weather, and the list goes on. The consequences of such stress can be significant and vary from a suppressed immune state, to the development of ulcers, to inefficient muscle metabolism and horses tying up. What these adaptogens and in particular APF is able to do is modulate the stress response and make it so that these horses are better able to cope, perform, and stay healthy.